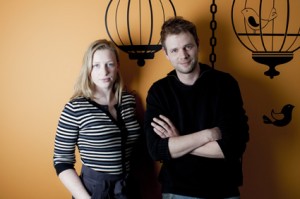 RTE and Ireland’s independent radio stations have combined to run a new episode in the series of radio promotion campaigns. If You Want to Be Heard is the theme of the fifth annual Choose Radio push urging advertisers to invest in radio by showing its power and reach. Jointly developed by the Independent Broadcasters of Ireland (IBI) and RTÉ Radio, the campaign goes out on all of Ireland’s 36 stations.

The JNLR shows that three million adults tune in daily and listen for about four hours. The ads, created by McCann Dublin’s Emma Sharkey and Ray Swan (pictured), convey radio’s ability to build awareness using Harvey Norman, Gavin from Autoglass and Old Mister Brennan, brands that have become synonymous with Irish radio. Produced and edited at Mutiny studios, the ads are broadcast three times a day for a fortnight.