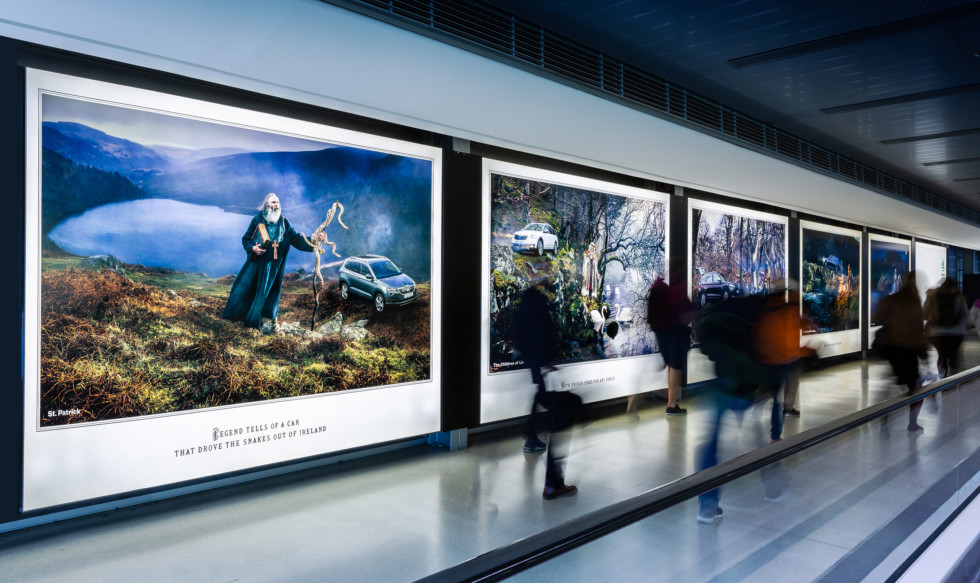 Škoda Ireland is investing €120,000 in a new Dublin Airport advertising campaign to promote its ‘Made for Ireland’ brand proposition, which includes a six panel takeover at the sky bridge in Terminal 1. For the past 18 months, Škoda has used the campaign to show car buyers that despite not being built in Ireland, the brand composition is suited to Irish lifestyles.

Cathal Kealey, marketing communications manager, Škoda Ireland, said that over the six months the DAA ads run, Made for Ireland will be seen over six million times. Laurence O’Byrne, creative director, Boys + Girls, said each ad plays on the brand’s benefits and link them back to historical legends such as the Children of Lir and the Salmon of Knowledge.

Boys and Girls worked with photographer Alex Telfer. Škoda also acquired the walled areas at three of the baggage reclaim belts in T1, where they erected a giant vinyl of a their carnivorous Superb Combi, to showcase its largest boot in its class. In Ireland, Škoda sold 9,056 passenger vehicles in 2017 through 27 dealers with a market share of 6.9 per cent.

Škoda has been part of the Volkswagen group in Ireland since 1993.

For more information on the campaign, go to www.skoda.ie